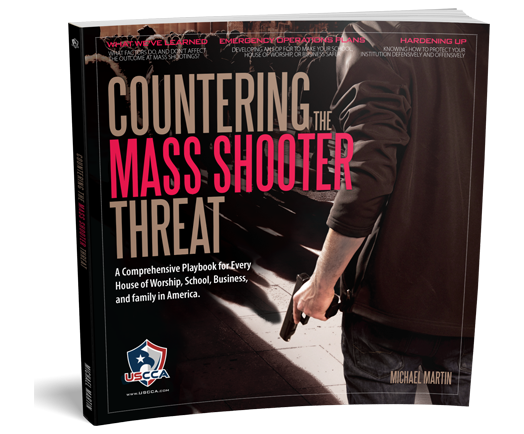 Shortly after the Las Vegas mass shooting in October 2017, I received an e-newsletter from the Well-Armed Woman advertising the book, Countering the Mass Shooter Threat: A Comprehensive Playbook for Every House of Worship, School, Business, and Family in America. My concern about this threat has concerned me for quite awhile. Wanting to gain a better understanding of them, I ordered the book with its two companion titles.

In addition to the increased frequency, some shootings have occurred close by. On June 5, 2014, a man opened fire at Seattle Pacific University, my husband’s alma mater. At that time we knew a senior student, whom we later found out usually hung out in the very room that was attacked. By the grace of God, she was tutoring freshmen in another room, and a valiant student stopped the perpetrator.

Another shooting happened in the greater Seattle area on September 23, 2016, at the Cascade Mall in Burlington, Wash. The architect/general contractor we hired to build our two houses on Whidbey Island works and lives in Burlington, and I contacted him to make sure he and his wife were safe.

Then the shooting at the Sutherland Springs church on November 5, 2017, really shook me up. Currently, I attend a small rural church, which sits highly visible along the highway. Could it happen there?

With this backdrop, I read with interest Michael Martin’s Countering the Mass Shooter Threat.

The impetus for the author to write this book (which originally began as a magazine article) was his desire to protect his young sons after one asked whether his school was safe after the Sandy Hook shooting. He told his seven-year-old that the police would keep him safe. But Martin knew he lied. After discovering that neither the school nor his church had any protection plans in place, he began a three-year search to gather data to answer his question: “What can counter this threat?”

The book is divided into two parts. Part One covers Martin’s research and the analysis of the data. Part Two offers practical solutions.

Part One opens with a definition for a mass shooting and discusses various factors behind the increase of these events. Next, the author examines his data from the 48 mass shoots from Columbine to the Pulse nightclub and asks if any of the common gun-control laws would have prevented any of them. Even though Michael Martin works as Chief Instructor of the United States Concealed Carry Association (USCCA), he was willing to follow the data to whatever conclusion they led. The data led him to this conclusion:

The solutions proposed by…gun control advocates have included limitations on magazine capacity, banning of AR-15s, universal background checks, and most recently, barring individuals from purchasing firearms who are on the federal terrorist watch list or the ‘No Fly’ list. The evidence clearly shows that if these proposals had all been passed, en masse, just before Columbine, they would not have prevented even one of the 48 mass shootings. Not one (p. 83).

In Part Two, Michael Martin explains how to identify possible mass shooters; provides outlines for Emergency Operations Plans for schools, houses of worship, and businesses; describes how to avoid being a victim; when and how to fight back; and first aid for the wounded.

He closes the book with calls to action. First, eliminate gun-free zones. He considers this a highly significant action in stopping mass shooters. Second, he lists six action points that an average person can do, which include sharing the book’s information with schools, houses of worship, businesses, and all levels of politicians. Last of all, he recommends that people get concealed carry permits.

The book contains numerous color photos, charts, and graphs that support the author’s arguments. For each section, the author provides an introduction and a concluding summary written in a clear, easy-to-read style.

The book could be improved if Martin cited all of his sources, explained a few terms for people not knowledgeable about firearms or emergency first aid, and added an index. Otherwise, I highly recommend this resource to anyone who is concerned about safety in public places.

Also by Michael Martin and published by the USCCA:

This site uses Akismet to reduce spam. Learn how your comment data is processed.